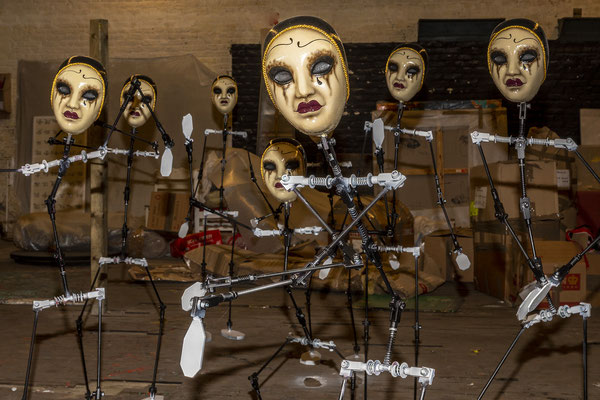 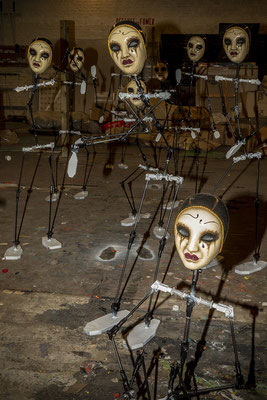 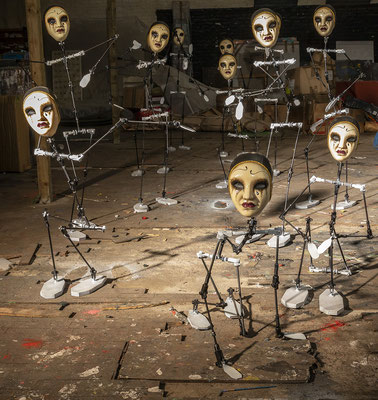 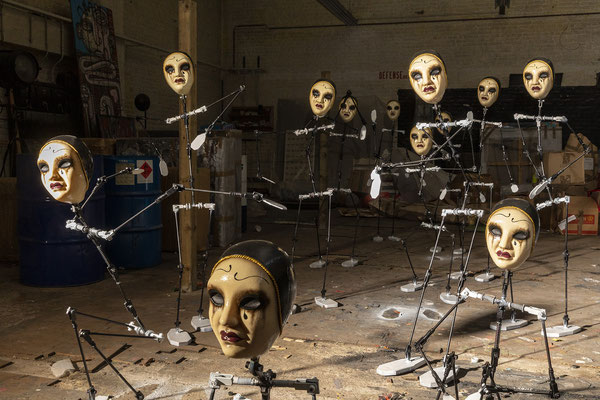 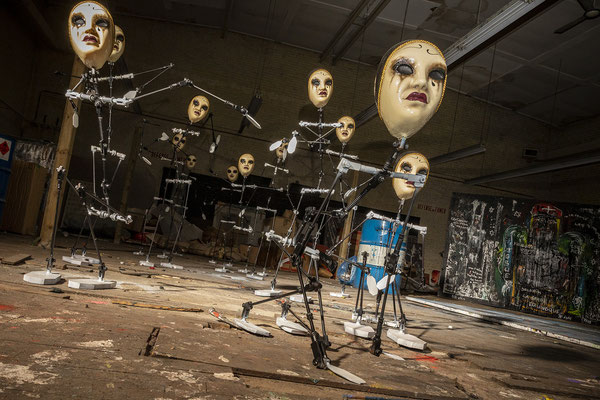 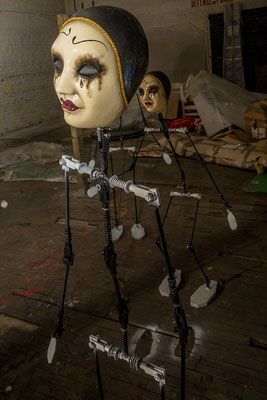 "Les Pierrots are an extremely recent installation, dating from late 2019. They are the culmination of a reflection on the destiny of contemporary man and the projection of the image of a disembodied and nostalgic society. The Pierrot is here a necessary tool for the artist who underlines the archetypal value of this major figure of the Commedia dell'arte, this Human Comedy whose mask symbolises both the candour and the naivety that make him vulnerable. Vulnerability appears to us as that of the artist (and of ourselves) hiding behind this appearance in order to better communicate to us the intensity of a drama that is played out in the depths of our beings. The artifice of this simulacrum belongs closely to the mythology of Friedler, who already in his character of Jack Balance, double of himself, had invented a masked incarnation allowing him to reveal the existential disorders that inhabit him. Les Pierrots are robots, prefiguration of a mechanized, disembodied humanity, almost reality of our world whose ever stronger will is to codify our existence even more, putting our own capacities at risk.

This is an existential threat, Friedler seems to indicate. The work is a parable of this consensual alienation, of our submission to a connected, decerebrating world, which compresses the individual into the shapeless and anonymous mass of men ultra-dependent on the computer tools he has invented, thus locking himself into a mass culture that alienates thought, sterilizes initiative and standardizes all reflexes. The robotic schematization of bodies underlines the uniformity and mechanization that erases individuality, a reality that the artist accentuates through repetition.

The reduction of the Pierrots' appearance to a metal skeleton illustrates the absorption of life; existence has been lost as neutralized and reduced to a ghostly, emaciated substance, still animated, however, by a poor sad look. Only the souls still wander in a nostalgia that Julien Friedler underlines with the tears of those Pierrots who still remember their luminous humanity. The work is at the same time moving and disturbing, highly expressionist, it questions the principles of metamorphosis and mutation proposed by a cyber-society that phantasizes on the "increased Self". Will we be able to escape the tragic destiny that the artist draws for us? The sad eyes of his Pierrots let us glimpse a more human despair."